In the present world, our lives have become completely dependent on technology. Day by day we see an increase in the number of industries that are switching to the online platform or scaling up. Therefore, with the increase in demand, it is important to provide the user with continuous deployment to stay current with software updates.

To provide the user with the same seamless experience, there are many techniques available in the market, but picking an effective deployment strategy is an important decision for every DevOps team.

Though there are many options exist in the market and choosing one of the different deployment strategies depends on various factors. 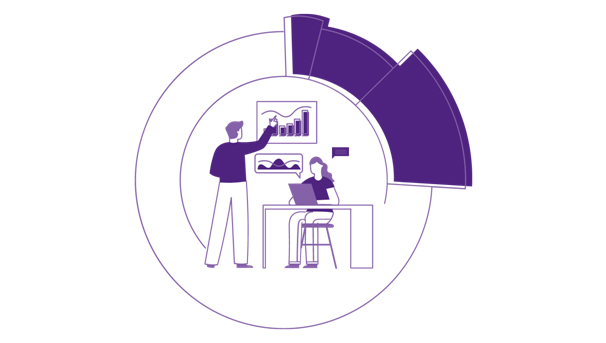 What is Canary Deployment?

The term “canary deployment” has an interesting history. It comes from the phrase “canary in a coal mine,” which refers to the use of small birds (canaries) by miners to detect dangerous levels of carbon monoxide underground. If the birds felt ill or died, it was a warning that odourless toxic gases, like carbon monoxide, were present in the air. From there, the idea of using the name “canary” as an early warning in the pipeline system came here.

Similar way, though the pipeline will be fully automated, detecting the number of bugs, broken features, unintuitive feature defects will be difficult until real traffic is hitting the real production servers. However, the testing environment and test cases probably don’t cover 100% of possible scenarios. Some defects will reach production. Canary deployment is one of the desirable ways for this scenario.

In software engineering, Canary Deployment is the practice of making staged releases. Canary deployments are best suited for teams who have adopted a continuous delivery process.

Here we roll out a software update to a small number of the users first, so they may test it and provide feedback. Once the change is accepted, the update is rolled out to the rest of the users.

One of the most effective points of using Canary deployment is that we can push new features more frequently without having to worry that any new feature will harm the experience of your entire user base.

With canaries, the new version of the application is gradually deployed to the server while getting a very small amount of live traffic (i.e. a subset of live users are connecting to the new version while the rest are still using the previous version). 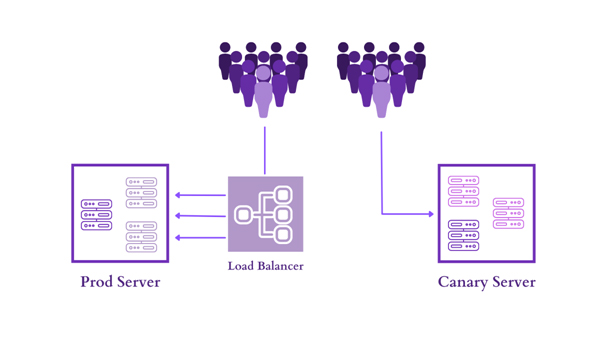 As we gain confidence over potential problems, security and reliability in the new code, more canaries are created and more users are now connecting to the updated version. Once the change is accepted, the update is rolled out to the rest of the users. 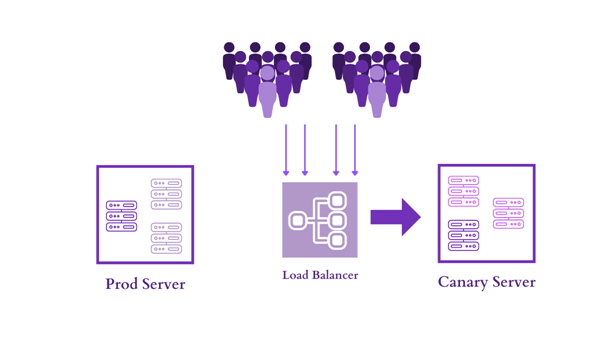 In a simple structure, the canary deployment has three stages.

Planning: The first step involves creating a new canary infrastructure where the latest change is deployed. A small portion of traffic is sent to the canary server, while the rest traffic continues with the prod server.

Testing: Once some traffic is diverted to the canary server, the data is collected in the form of metrics, logs, information from all network sources and later tested to determine the performance and functionality of the new canary feature are working as per expected by comparing it with the Production server.​

Rollout: After the canary analysis is completed, the team decides whether to move ahead with the release and roll it out for the rest of the users or roll back to the previous baseline state as per inputs received from the Testing phase.

Canary Deployment includes many benefits from less down time, real world testing to quick rollback. This is one of the most widely used deployment strategies, because not only it’s quick but also provides real world testing for the application. Conversely, canary deployment is the most useful when the development team isn’t sure about the new version and they don’t mind a slower rollout if it means they’ll be able to catch the bugs.

Let’s take a look at how it works.

We can implement Canary deployment in two different ways:

Some significant DevOps Metrics/KPIs covered in Kaiburr at Organization and portfolio levels are: 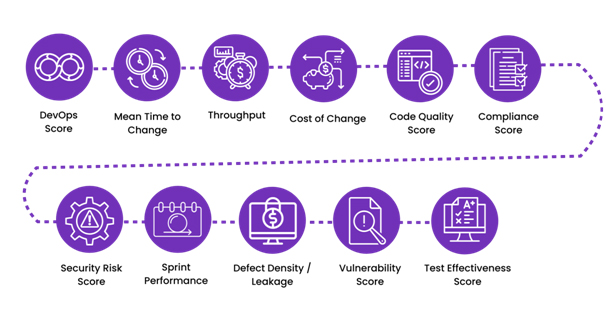 For more information on how you can practically enable Engineering Excellence at your organization visit us at Kaiburr or sign up for a demo by contacting at contact@kaiburr.com.